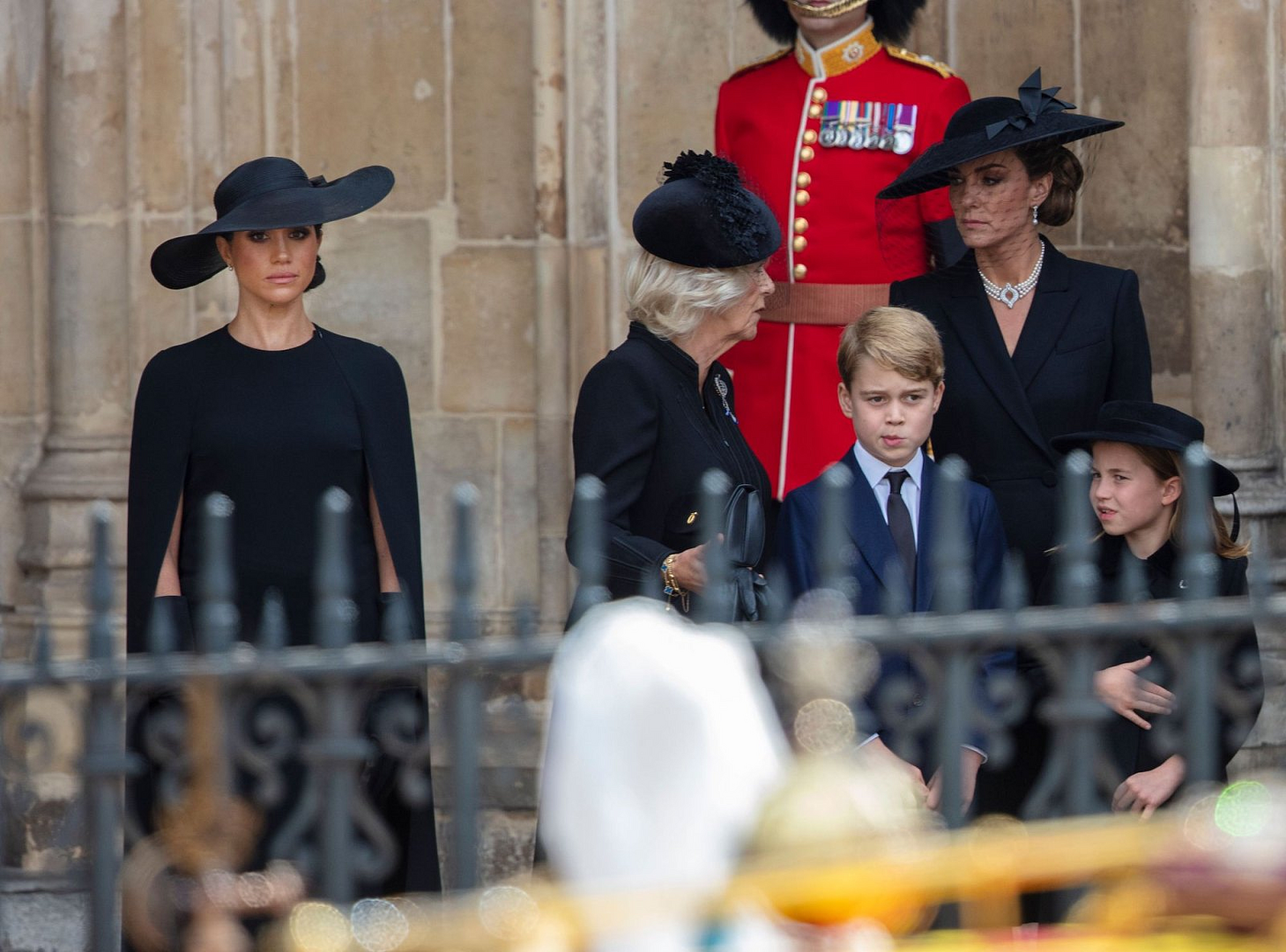 Queen Elizabeth II was laid to rest alongside her beloved husband on Monday after a day which saw Britain and the world pay a final farewell to the nation’s longest-reigning monarch, in a dazzling show of pomp and ceremony. Amid formality and careful choreography, there were moments of raw emotion. Late in the day, an ashen-faced King Charles held back tears, while grief was etched on the faces of several members of the royal family.

Kate Middleton and Meghan Markle paid subtle tribute to the late British monarch. For the funeral on September 19, the Princess of Wales and Duchess of Sussex donned jewellery gifted to them by Queen Elizabeth. Kate wore pearl drop earrings and a four-strand pearl and diamond choker, the latter of which she has worn on many occasions over the years, reported E! Online.

Kate first wore the priceless necklace in 2017, during the Queen and Prince Philip’s 70th-anniversary celebrations, later donning it for the latter’s funeral in 2021 as well.  The pearls from the choker were reportedly gifted to the Queen by the Japanese government in the 1970s. The Queen wore the necklace several times throughout her life, including at Prime Minister Margaret Thatcher’s 70th birthday party in 1995.

As for the earrings, those were a wedding gift to Queen Elizabeth from the Hakim of Bahrain. Notably, Princess Diana also wore both the necklace and earrings for multiple state events, including on a state visit with the Netherlands’ Queen Beatrix in 1982.

Like Kate, Meghan honoured the Queen through her mourning outfit. For the services, she wore a pair of diamond and pearl stud earrings, which were gifted to her by the Queen in 2018. Meghan was first seen wearing the studs during her first and only joint appearance with the Queen in June 2018. Since the Queen’s death on September 8, the royal family has paid tribute to their beloved grandmother in many ways, including through their mourning outfits.

Buckingham Palace confirmed Kate was wearing the Queen’s favourite three-strand pearl necklace to a reception for the governors-general of the Commonwealth nations on September 17. The Queen wore the pearls almost daily, even sporting them in her last-ever portrait, which was released on the eve of her funeral. According to Buckingham Palace, the photo of the beaming Queen was taken earlier this year to mark the Platinum Jubilee.

Huge crowds thronged the streets of London and at Windsor Castle to witness the moving, grand processions and ceremonies. “Few leaders receive the outpouring of love that we have seen,” Justin Welby, the Archbishop of Canterbury, told the congregation at the state funeral in the majestic Westminster Abbey, where monarchs have been married, buried and crowned over the last 1,000 years.

Among the 2,000 congregations were some 500 presidents, prime ministers, foreign royal family members and dignitaries, including Joe Biden of the United States.

At the state funeral, Welby told those present that the grief felt by so many across Britain and the wider world reflected the late monarch’s “abundant life and loving service”. Reuters quoted Welby as saying, “Her late majesty famously declared on a 21st birthday broadcast that her whole life would be dedicated to serving the nation and Commonwealth. Rarely has such a promise been so well kept.”

Music that played at the queen’s wedding in 1947 and her coronation six years later again rang out. The coffin entered to lines of scripture set to a score used at every state funeral since the early 18th century.

After the funeral, her flag-draped casket was pulled by sailors through London’s streets on a gun carriage in one of the largest military processions seen in Britain, involving thousands of members of the armed forces dressed in ceremonial finery.

They walked in step to funeral music from marching bands, while in the background the city’s famous Big Ben tolled each minute. Charles and other senior royals followed on foot.

The casket was taken from Westminster Abbey to Wellington Arch and transferred to a hearse to travel to Windsor, where more big crowds waited patiently. Among those who came from around Britain and beyond, people climbed lampposts and stood on barriers and ladders to catch a glimpse of the royal procession.

Some wore smart black suits and dresses. Others were dressed in hoodies, leggings and tracksuits. A woman with dyed green hair stood next to a man in morning suit as they waited for the London procession to begin. “I’ve been coming to Windsor for 50 years now,” said Baldev Bhakar, 72, a jeweller from the nearby town of Slough, speaking outside Windsor Castle. “I saw her many times over the years; it felt like she was our neighbour and she was just a lovely woman; a beautiful queen. It was good to say one last goodbye to our neighbour.”

Millions more watched on television at home on a public holiday declared for the occasion, the first time the funeral of a British monarch has been televised.