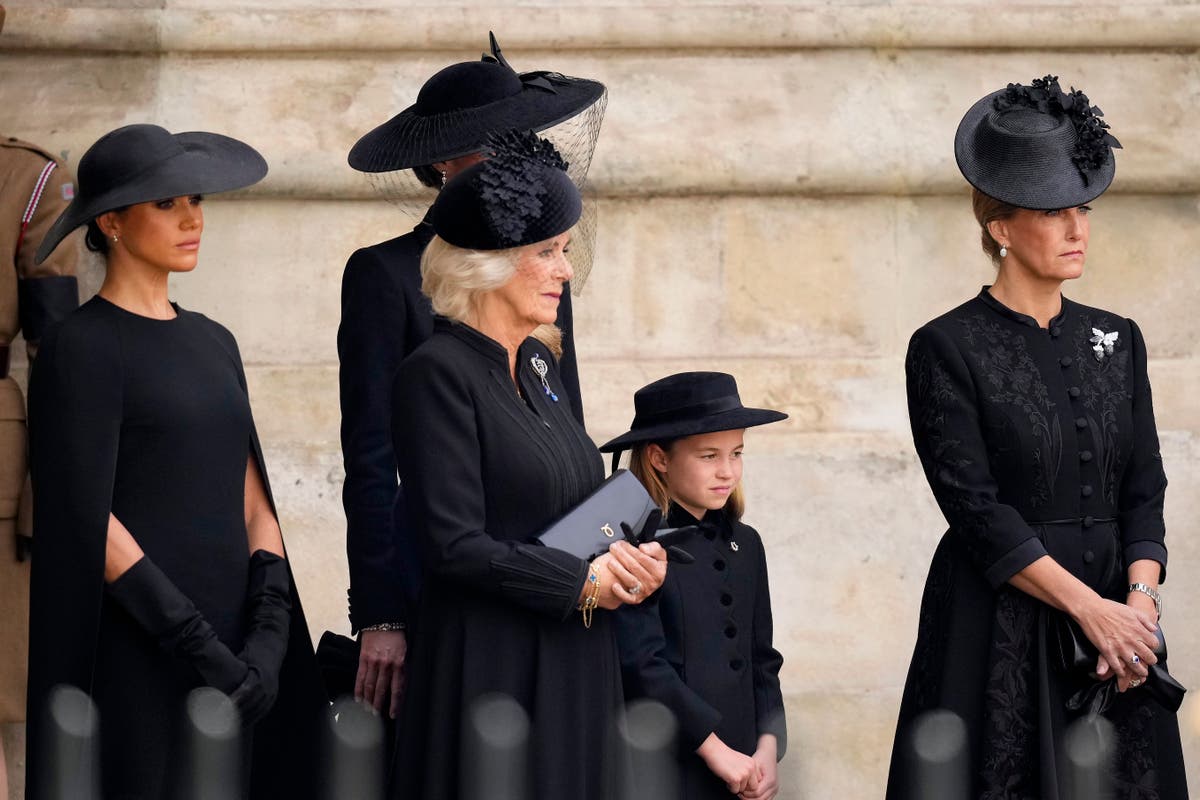 Meghan Markle has appeared to offer a comforting smile to her niece Princess Charlotte during the funeral for Queen Elizabeth II.

On Monday 19 September, the royal family came together for a state funeral service at Westminster Abbey to honour the life and rule of the late monarch, who died on 8 September at the age of 96.

At the conclusion of the service, the Duchess of Sussex, who was seen wiping away a tear, stood outside Westminster Abbey alongside Camilla, Queen Consort, and the Princess of Wales. The latter was joined by her and Prince William’s two oldest children, Prince George, nine, and Princess Charlotte, seven.

As the group stood together, Charlotte, who was standing in the front, was seen turning around briefly to look at her aunt. Meghan caught her niece’s eye and offered her a brief smile.

For the somber occasion, Princess Charlotte wore an all-black outfit that matched her mother’s, while the seven year old paid tribute to her great-grandmother with the horseshoe-shaped brooch she wore attached to her dress.

The Duchess of Sussex also paid tribute to the Queen through her sartorial choices, with Meghan choosing a black, knee-length cape dress by Stella McCartney and a black hat for the funeral. The dress choice was notable as the duchess previously wore a navy blue version of the dress to a concert in celebration of the Queen’s 92nd birthday at Royal Albert Hall in April 2018.

In addition to the connection to the monarch through her dress choice, Meghan also wore a pair of pearl and diamond earrings gifted to her by the Queen.

Princess Charlotte later shared a similar sweet moment with her uncle, the Duke of Sussex, during the service at St George’s Chapel, when the seven year old adjusted her hat before looking over at Prince Harry. After catching her uncle’s eye, Prince Harry smiled at the princess.