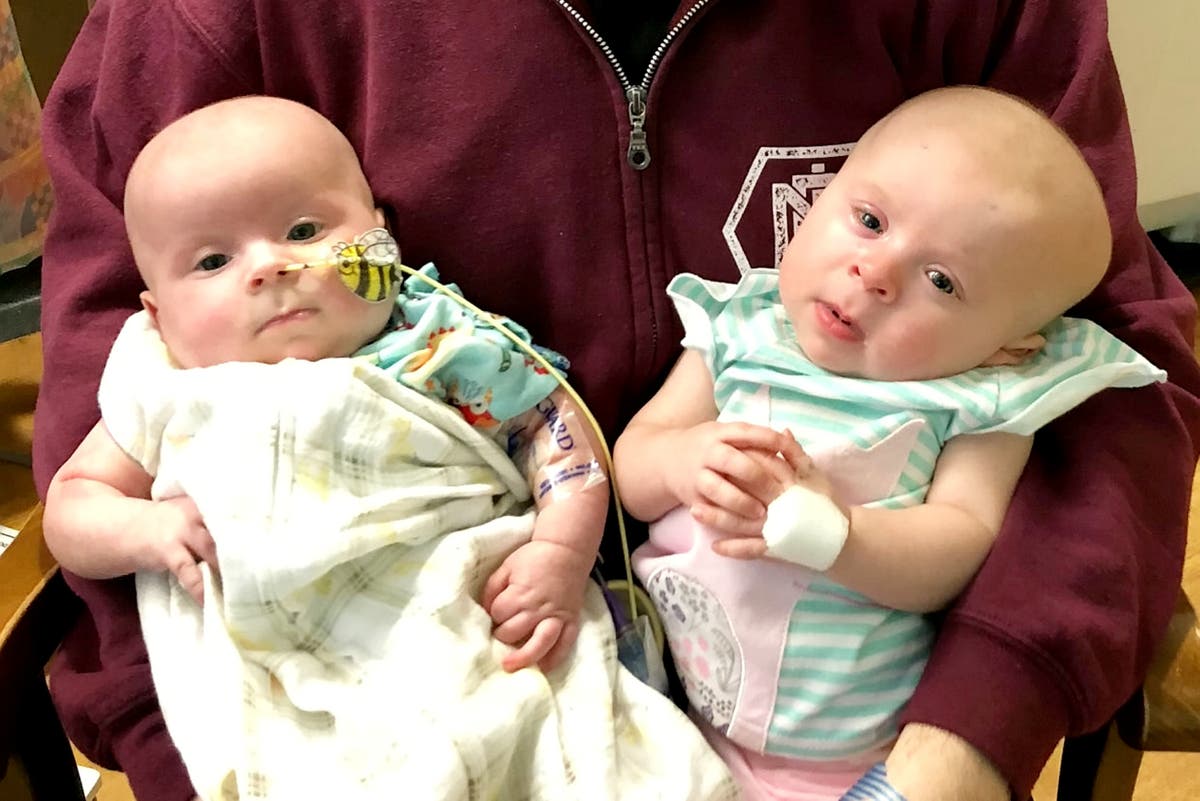 A mother was devastated to discover both her twin daughters had eye cancer when they were just weeks old — and crushed when one relapsed this year.

Maryann Oakley, 43, thought her twins, Eve and Ella, now four, were perfectly healthy when they arrived on 19th December 2017 at Hershey Hospital, Pennsylvania, US.

But at 10 days old Maryann and her lighting and sound engineer husband, Nathan, 35, noticed little Eve wasn’t eating and was crying in pain.

Rushing her to hospital, an emergency surgery revealed the infant had a twisted bowel, which sent her body into septic shock.

After examining her eyes, doctors found a tumour and diagnosed her with retinoblastoma in January 2018.

Three days later, Eve’s twin Ella was diagnosed with the same cancer after Maryann took her into be examined.

The twins battled the cancer together and Ella finished chemotherapy in May 2018, followed by Eve in June 2018.

They were both declared stable but in March 2022, Maryann was given the devastating news Eve’s cancer had returned.

Maryann, who is a full-time carer for the twins, said: “It’s been so tough, and it’s just become our lives now.

“We don’t know any different.

“Cancer is our normal.

“Ella is so upset every time Eve leaves for treatment.

“Everything is still so uncertain, but we try and make every day as special as we can for them.”

Maryann and Nathan took baby Eve back into hospital after she stopped eating and became lethargic at 10 days old.

“She was wailing in pain all of a sudden,” Maryann said.

Doctors first thought Eve had meningitis, but discovered she had a twisted bowel when she was rushed in for emergency surgery on her stomach – and she was fitted with a stoma bag when they had to remove a large part of her intestine.

After the procedure, the tot went into septic shock and her parents were told her organs were failing.

“We had no idea if she would make it,” Maryann said.

But things got worse when doctors examined Eve’s eyes and spotted a tumour and diagnosed her with retinoblastoma.

“We knew straight away we needed to get Ella check out too,” Maryann said.

“We took her to Children’s Hospital of Philadelphia and she was diagnosed with it three days later.

“I was absolutely devastated.”

Ella was started on chemotherapy straight away and Eve followed a few days later when doctors realised her tumour was growing and they couldn’t wait for her to recover from septic shock to treat it.

“I didn’t know if Eve would make it still, she was so ill and then she was having to go through chemotherapy too,” Maryann said.

“We were having to drive Ella in every day for her treatment and Eve stayed in as she was so ill.

“It was horrible seeing them both go through chemotherapy.”

Miraculously both twins pulled through, and Ella was declared stable in May 2018, and Eve in June 2018, but their parents were warned that they weren’t in the clear.

Ella relapsed in August 2018 but has been stable since September 2018, after she was treated with radiation light beam therapy.

“We were told it could still come back and they are also at risk of developing brain cancer,” Maryann said.

“If they do it’s very hard to treat so it would be a grim prognosis.

“They have to go for checks every year.

“Eve lost a lot of hearing because of her septic shock so now she wears hearing aids and has extremely high blood pressure.”

Maryann got the devastating news in March 2022 that Eve’s cancer had returned.

“We were crushed,” she said.

“It’s really painful for her when she comes round.

“Ella worries about Eve when she leaves for treatment.

Maryann and Nathan are anxiously praying Eve will pull through and will find out in September 2022 if Ella is still stable.

“We try to make every moment special for them because the next day isn’t certain for them.

“Cancer is all we have known.

“All we can do is stay as positive as we can for Eve and Ella.”