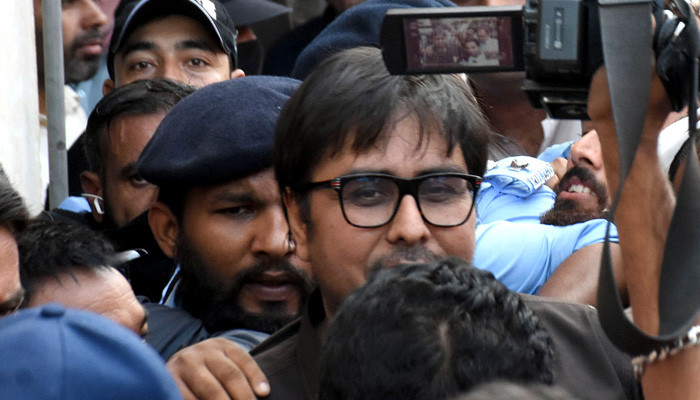 Gill and others were named in the petition filed in the Islamabad High Court (IHC) today.

The petitioner urged the high court to declare the decision taken by the district and sessions court null and void while extending the physical remand of the PTI leader.

Gill was arrested on Tuesday afternoon from Banigala Chowk in the capital a day after making controversial remarks on a private TV. He was subsequently booked on charges of sedition and inciting the members of the state institutions against their leadership.

A treason case was registered against him at Kohsar Police Station under several sections Pakistan Penal Code, including 124-A (sedition), 131 (abetting mutiny, or attempting to seduce a soldier, sailor or airman from his duty), 153 (wantonly giving provocation with intent to cause riot if rioting be committed; if not committed), 153-A (promoting enmity between different groups, etc), and 505 (statements conducing to public mischief), 506 (punishment for criminal intimidation), among others.

During the hearing a day earlier, the investigating officer (IO) submitted an application to the court seeking the extension of Gill’s physical remand by 12 days stating that the physical remand was necessary for the arrest of others involved in the offence and the recovery of the mobile phone used by the PTI leader for the commission of the offence.

However, Gill objected to the IO’s application, claiming that police were “using [the] physical remand only for the purposes of torture”.

He said that no mobile phone was used for his comments on the news channel, pointing out the remarks during the live transmission were aired on August 8, when mobile phone services remained suspended on account of 9th Muharram.

Gill said, he was speaking during the news bulletin via the landline phone installed at his Banigala office and therefore, “there is no justification for [the] grant of physical remand”.

Based on the counsels’ arguments and Gill’s statements, Judicial Magistrate Umar Shabbir observed that since the police had already obtained the video and audio of Gill’s remarks and the results of the voice matching test had been received, the investigation of the case had, in fact, been completed and there was no need for an extension of the suspect’s physical remand.