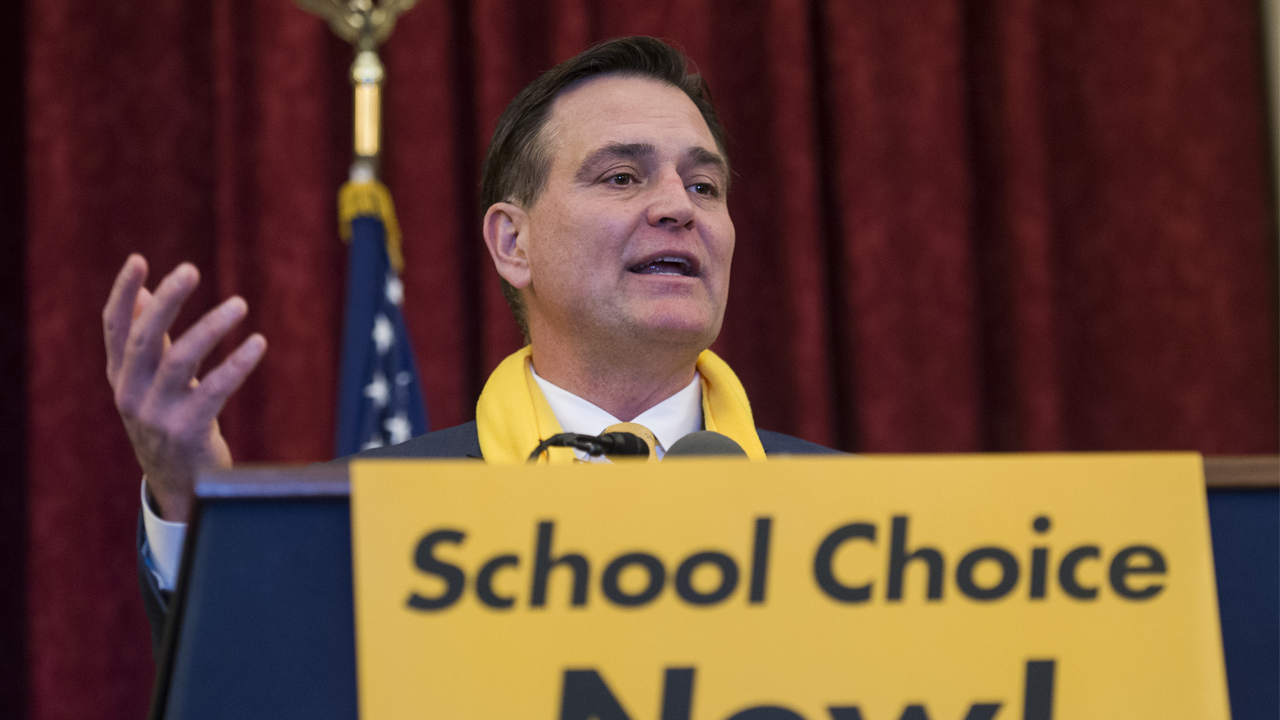 School choice should become something of a litmus test for Republican candidates, and is an issue that can unite voters on both sides of the aisle, Luke Messer, president of the Invest in Education Foundation told Fox News Digital.

“In a world where… people disagree on everything that they seem united at and school choice,” he said.

School choice has gained increasing attention with Arizona passing the most expansive school choice measure in the nation, and parents throughout the pandemic choosing to pull their students from public schools.

Rep. Luke Messer, R-Ind., speaks during a rally to promote the importance of school choice as part of “National School Choice Week,” in Russell Building on January 18, 2018.
((Photo By Tom Williams/CQ Roll Call))

Messer said there are key messages that resonate with voters, regardless of political party.

“Schools should be focused on teaching the basics, and stop pushing a political philosophy. Parents should be able to move their children to a different school if they believe their school has become too political,” he said.

These key messages resonate with voters, regardless of demographic, Messer added.

FREDERICK HESS: SCHOOL CHOICE IS ON A ROLL. HERE ARE 3 WAYS TO KEEP IT GOING.

“These are messages that are very popular with base Republicans, but very popular as swing constituencies and independents,” he added.

Messer argued it is teachers unions, not voters, who oppose school choice.

“School choice is supported by the majority of Democrats in America today, it’s just not supported by the teacher union leadership, and the folks that fund the Democratic Party,” he said. “What I believe is this issue is one of the fundamental issues in reshaping the new American majority.”

Messer noted that even in Texas, where school choice measures have historically failed in the legislature, Gov. Abbott has supported voucher programs.

“The traditional debate has been that parents in certain suburban school districts were fearful that school choice could somehow undercut the quality of their schools. … What’s changing is now suburban parents have awakened, and they now realize that many of their local school leaders are not responsive either, and the two issues that have driven that awakening, is the tragic results in the wake of the failed pandemic policies in schools … and then the emergence of this woke social debate in schools.”

SEE THE CHART: SHARP DECLINES IN MATH AND READING SCORES DURING COVID

New data released from the U.S. Department of Education Thursday showed sharp declines in reading and math scores from 2020 to 2022, particularly for lower-performing students.

Data released by the National Center for Education Statistics showed the largest score drop in reading among 9-year-old students since 1990, and the first-ever score drop in mathematics among the same age group.

Messer said legislation like the Education Choice for Children Act, which has been introduced earlier this summer in both the U.S. House and Senate, would help ensure student learning, and provide solutions for parents concerned with their children’s schools.

“A small government approach to this that doesn’t create a federal department of school choice, but still is a federal policy that would make a difference and give families options that they don’t have today,” he said of the legislation.

The legislation would allow for a tax credit for charitable donations to organizations that provide scholarships for elementary and secondary students.

“Imagine how much more quickly schools would have opened in the pandemic if a million families could have moved their feet and gone somewhere else,” Messer said.

For candidates running in the upcoming election, Messer advised them to speak up about school choice.

“If you support school choice, don’t be quiet about it, you need to tell everybody,” he said.

Kelsey Koberg is an Editor with Fox News Digital. Story tips can be sent to kelsey.koberg@fox.com and on Twitter: @KelseyKoberg.