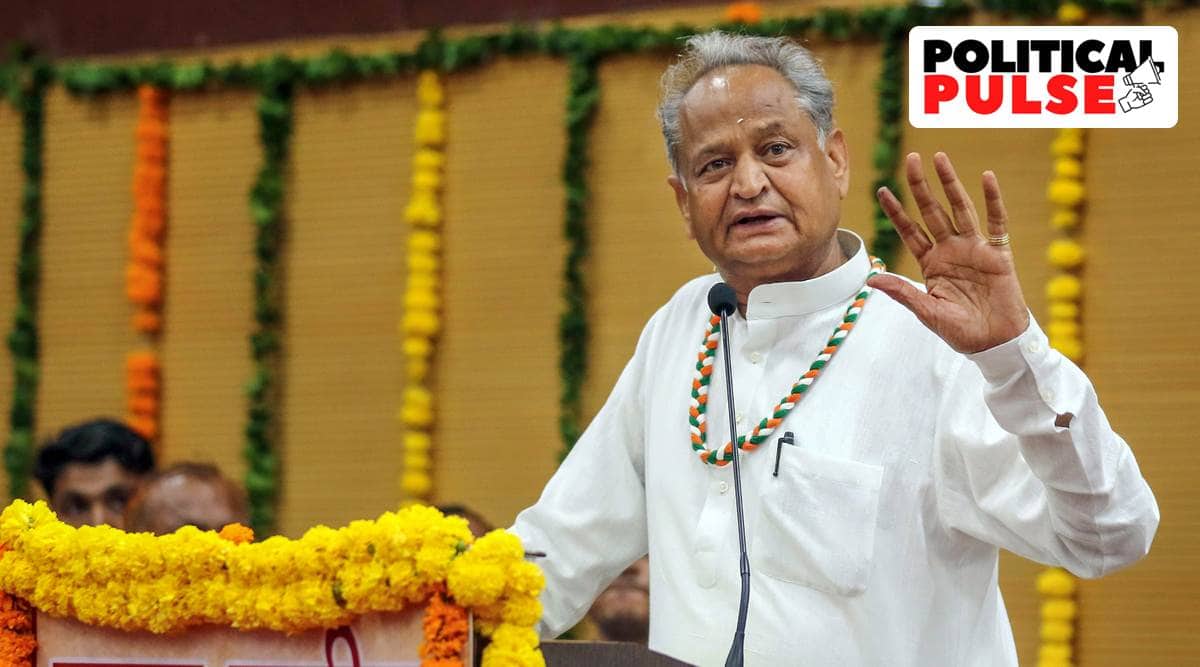 Ahead of his meeting with Congress interim president Sonia Gandhi in Delhi, Rajasthan Chief Minister Ashok Gehlot Wednesday said he will contest for the top post if the leadership asks him to do so. He also made it amply clear that he wants to continue as CM in the state.

In his first public statement on the issue of Congress presidentship, Gehlot said he will not be able to turn down any direction from the leadership, meaning the Gandhis. After his meeting with Sonia, Gehlot is to fly down to Kerala to meet Rahul Gandhi.

On remaining the CM, Gehlot said: “The party has given me everything. I have been holding various posts for the last 40-50 years. Posts and positions are not important to me. Fulling the responsibilities given to me is more important… Today I am the CM… I am fulfilling that responsibility… nibhata rahunga main (I will keep fulfilling that).”

Meanwhile, Lok Sabha MP Shashi Tharoor, who may face off against Gehlot for the Congress president election, met Madhusudan Mistry, who is overseeing the process as the party’s central election authority, at the AICC office.

Mistry is believed to have told Tharoor and the other MPs that the list of all 9,000-plus delegates for the election will be available at his office at AICC, Delhi, from September 20 (nominations begin on 24th). The contestants could pick the 10 members whose support they need from the list, across states, and obtain their signature for nomination, the MPs said.

Asked about the ‘one man, one post’ rule, touted as a major organisational reform reiterated by the party at the Udaipur Chintan Shivir, Gehlot argued that it covered those posts to which one was nominated. “Here, it is an open election, anybody can contest, anybody from the 9,000 delegates, be it an MP, MLA, minister or CM. Say, a state minister wants to contest, it may be that he or she remains a minister and becomes the Congress president.”

Asked specifically whether he will remain CM, Gehlot said: “Time will tell… But I would like to be in a place where my presence benefits the party… wherever I am… one post, two posts, three posts, or without any post.”

Gehlot claimed he enjoyed the trust of everyone in the party. Asked about the Gandhi family’s faith in him, he said: “Gandhi parivar ka toh hai hi hai, jitne Congress jan hain, un sab ke parivaron ka vishwas mere upar hi hai (It’s not just the Gandhi family, all the people in the Congress, their families too trust me). And I am lucky that Congress people across the country love and trust me… So I won’t be able to say no. Jahan mujhe kahenge… form bharna hai, main form bharoonga (Wherever they tell me to fill the form, I will). I will talk to my friends too.”

Reiterating that he didn’t hanker for posts, Gehlot said: “Left to me, I would not take up any post… I want to participate in Rahul Gandhi’s yatra. The situation the country is facing today, the concerns before the country… the Constitution is being subverted, democracy is in danger, the entire country is being destroyed… At such a time do positions matter? Without posts too, one can do everything.”

Asked about a possible contest between him and Tharoor, Gehlot said: “Such contests should happen… Only then will people know that there is democracy in the party. When Rajnath Singh became (BJP) president, Amit Shah, J P Nadda became presidents, was there any discussion in the country? We are very lucky that the media in the country only discusses the Congress.”

On his meeting with Rahul Gandhi, Gehlot said he would use it to request him once again to take over as Congress president. “If he undertakes the yatra as the Congress president, there will be more impact. I will go and talk to him, then I will decide.”

Speaking to the media in Kerala, on the sidelines of Rahul’s yatra, AICC general secretary in-charge communications Jairam Ramesh said that on September 23, kept aside as break day, Rahul might go to Delhi. It will just be to meet Sonia, who is ill and underwent some tests recently, Jairam said.

“Rahul has not met his mother for the last 2-3 weeks. He is also a human being. Will you not go and meet your mother if she is not well? According to the information I have now, if he goes to Delhi, it will be to meet his mother and not to file the nomination,” Jairam said.