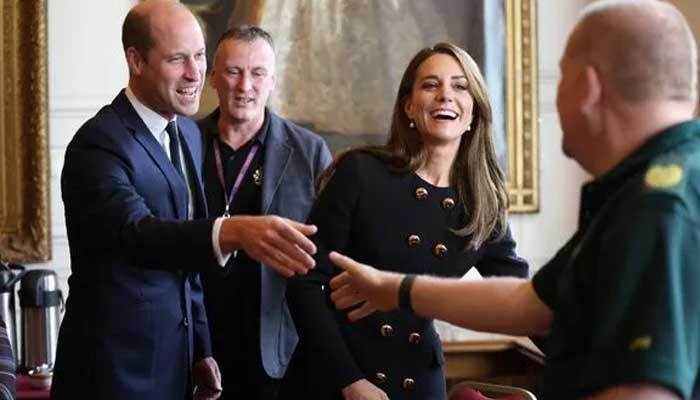 Royal fans reacted to Prince William and Kate Middleton’s new pictures showing them laughing while meeting with volunteers and operational staff who were involved in facilitating the committal service for Queen Elizabeth II.

The Prince and princess of Wales were all smiles when they made her first appearance since Queen’s funeral at Windsor’s Guildhall to meet the unsung heroes on Thursday.

Responding to the pictures of Kate and William, one fan wrote on Twitter: “Beautiful couple.”

They added: “Proud of the Prince and Princess they have held up well over the past day, but the days ahead of them will be sad, but the rest of the country is with them. God bless.”

Another reacted: “A nice gesture for the Prince and Princess of Wales to take time out of their mourning period to personally thank unsung heroes.”

A third user agreed, saying: “Service and duty – just as our beloved late Queen taught them.”

Kate and William were both dressed in black outfits for the engagement, as it comes amid the seven-day period of royal mourning.