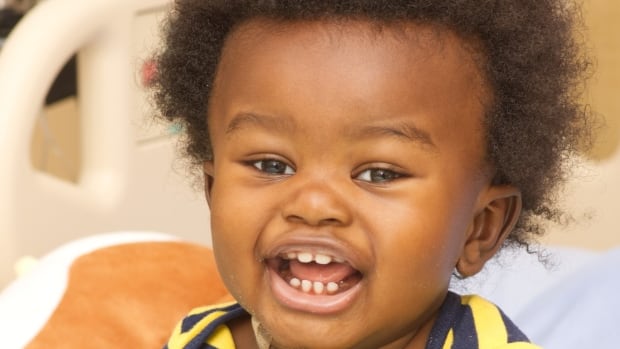 A two-year-old boy from Lac La Biche, Alta., whose search for a stem cell donor captured hearts and headlines across the country, died Friday as he waited for a match.

Ezra Marfo was diagnosed with acute myelogenous leukemia in 2021.

His father, Jacob Marfo, became a stem cell donor to help Ezra, but was not a perfect match.

That’s when he began a national campaign, known as Swab4Ezra, to find a donor match for his son.

“Even though he was on this earth for just about two years or a little over two years with what we started to bring awareness to the stem cell drive, especially the need for people with Black skin or Africans and Caribbeans,” Jacob Marfo told CBC.

According to Canadian Blood Services, less than one per cent of donors on the registry are of African, Black, or Caribbean descent.

That made it incredibly hard to find Ezra a match, his father explained.

Human leukocyte antigens — proteins found in cells in the body — are measured to rank matches. Most transplant doctors aim for a nine or 10 out of 10 match for stem cell transplants.

Ezra’s family members in Canada were all tested but no match was found.

The family travelled across the country for Swab4Ezra events where people could get a swab, give their personal information, and be added to the stem cell database, all in hopes of finding Ezra’s perfect match.

Marfo said Swabs4Ezra will continue to work toward building a more diverse registry.

“The best we can do is to continue with Ezra’s legacy. I know there are a couple of matches because of what we’ve done. Knowing that gives us a little bit of satisfaction that what we’ve done even though Ezra is not alive to benefit, is helping other families,” he said.

Swabbing can be done at home

All that is required to be on the registry is a swab inside your cheek, Marfo said. The most painful part is filling out the paperwork. Blood Services Canada also allows people to order a take-home kit online and do the swabbing test themselves.

The stem cells are extracted by a blood test. Stem cells are separated from the blood and then injected into the patient in need.

“I call the volunteers at Swab4Ezra events ‘Ezras’ because his name means helper, and volunteers are making sure people are added to this very important registry,” Marfo said.

Marfo is asking people to join the registry irrespective of background.

“No matter what we do, my one and only child Ezra is not coming back. But at the same time, his name will forever live on because of the awareness that we are bringing to this cause.”