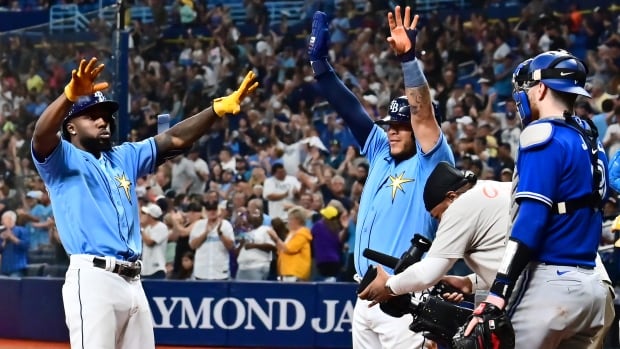 Randy Arozarena hit his 20th homer and drove in six runs as the Tampa Bay Rays beat Toronto 10-6 Friday night, tying the Blue Jays at the top of the AL wild-card standings.

The win clinched the season series — and the tiebreaker — for the Rays, who have won 10 of 17 against the Blue Jays.

Arozarena’s three-run homer gave Tampa Bay a 6-4 lead in the fifth inning. He hit a two-out, two-run single in the eighth off Yimi Garcia (4-5).

Bo Bichette and Vladimir Guerrero Jr. hit RBI singles during a four-run fifth off Jeffrey Springs that put the Blue Jays ahead 4-3.

After Arozarena put Tampa Bay ahead, Toronto tied it at 6 in the sixth on George Springer’s sacrifice fly.

Miles Mastrobuoni, who made his major league debut as a defensive replacement Thursday night for Tampa Bay, singled in the fifth for his first hit.