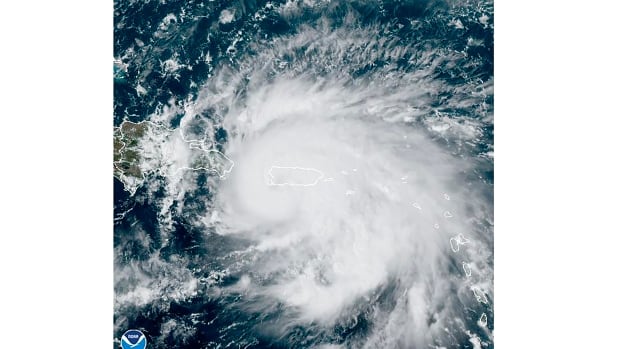 Hurricane Fiona continues to be a storm to watch in Atlantic Canada over the next few days.

The hurricane is set to travel northward and into Maritime waters late Friday and Saturday as it transitions to a post-tropical storm.

It’s important to remember that a transition to post-tropical does not mean it will be a weaker storm, but that the storm will change its structure, grow in size and actually cover a larger area.

A track near Cape Breton and into the Gulf of St. Lawrence looks most likely at this point, however the “cone of uncertainty” — the area where the storm could hit — remains quite large as we are still a few days out.

While some uncertainty remains with the track and details, it’s all but certain the storm will have an impact in the region.

Prolonged heavy rainfall and potential for flooding is likely along and left of the track.

Tropical storm force winds, or higher, are likely near the centre of the storm and to the right of the track.

With the trees in full leaf, the potential for power outages will be high for those places that get the strongest winds.

Storm surge is also likely, however the impacts will be highly dependent on the track and timing of the storm and how it coincides with high tide.

While much depends on the exact track of the storm, people in Cape Breton, eastern and central Nova Scotia, P.E.I. and eastern New Brunswick should begin to prepare.

Things like making sure your emergency kit is ready, topping up your propane tank, clearing your downspouts and storm drains and making sure your sump pump and generators are in working order, are all things you can do to prepare over the next few days.