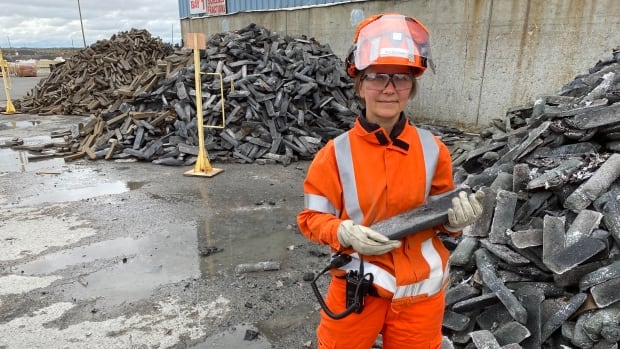 The mining giant has been recycling metals at its Sudbury smelter for 32 years.

Sari Muinonen, Glencore’s custom feed manager in Sudbury, says the company has had excess capacity at its smelter for decades, which it uses to melt down “super alloys.”

Those alloys, which come from things like aircraft engine turbines or even parts from machine shops, are melted down, granulated and shipped to a facility in Norway, where they are separated into their base elements like nickel and cobalt.

Muinonen said around 25 per cent of its smelter capacity is used to process nickel from its Sudbury mines. Another 50 per cent is dedicated to nickel from a mine the company owns in Quebec. The rest is available to recycle metals.

She said the recycling piece is already an important part of the business in Sudbury.

“The concentration of nickel and cobalt in some of these elements are much, much higher than concentrate,” Muinonen said.

“So the metal value contained is very interesting for us to look at. It’s a low volume, but because per ton or per kilo of feedstock they’re very rich.”

But as electric vehicles become more common, the batteries used to power them, which contain elements like nickel, cobalt and lithium, should increase that volume of material available to recycle.

“Right now we wouldn’t imagine seeing, you know, a Tesla battery being removed from a vehicle and landing here on our doorstep. But through some pretreatment processes, definitely we have an opportunity to bring those materials in,” Muinonen said.

Peter Xavier, vice-president of Glencore’s Sudbury Integrated Nickel Operations, told CBC News in March that the company has been in regular contact with automakers to supply the materials they will need to build more electric vehicles.

“For us in the industry, you know, we always knew that we were critically important,” he said.

“And we produce the things we produce for a reason; because the world needs it and there’s a certain purpose behind that.”