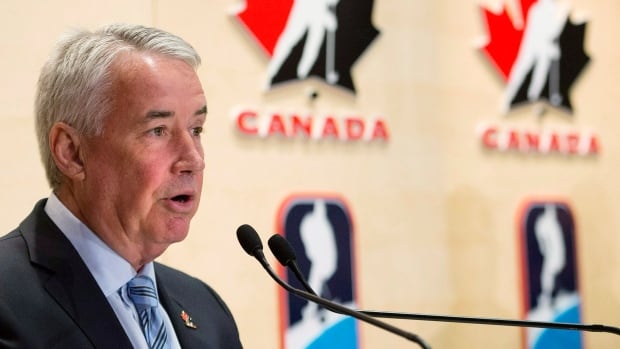 The House of Commons heritage committee has ordered another round of hearings on Hockey Canada’s handling of sexual assault claims, with former and current top executives and board chairs summoned to testify.

It will be the third time Hockey Canada executives have testified before the committee since news broke of an alleged sexual assault involving players on Canada’s junior team in 2018 after a Hockey Canada gala in London, Ont., and a hushed settlement between the organization and the complainant.

A second allegation against members of the 2003 junior team has surfaced since.

Skinner took over as board of directors chair after Brind’Amour stepped down Aug. 6 before his term was set to end in November.

Nicholson was chief executive officer of Hockey Canada from June 1, 1998 until June 1, 2014. He now serves as chairman for the NHL’s Edmonton Oilers.

A recent survey distributed by Hockey Canada has left some shaking their heads over what they see as out-of-touch questions about the organization’s handling of sexual assault allegations.

The survey, which CBC News has seen, was distributed to parents, volunteers and coaches and asked for their opinions of the sport’s national body.

Participants were asked to rate their level of agreement with several statements, including:

They also were asked to weigh in on how important is it for Hockey Canada, while it works “to address systemic issues in hockey,” to “discontinue the use of membership fees to cover uninsured sexual misconduct claims.”

Hockey Canada told a parliamentary committee it took most of its settlement money from its National Equity Fund, which is funded in part by minor hockey league registration fees — a fact that has sparked public outrage.

The organization said in July it would no longer use the fund to settle such claims.

St-Onge also said the wording of the question regarding media coverage was off-base.

“Asking if it’s the media that created this whole crisis when we’re talking about possible rape, multiple times, I think it’s underestimating the depth of the problem and the urgency and the action that needs to happen,” she said.

In a statement, the organization said it wasn’t trying to downplay the challenges it’s facing or the “horrific allegations of sexual assault against former members of the National Junior Team.”

“Certain survey questions were constructed to gauge sentiment and awareness of the issues facing Hockey Canada from members of the hockey community,” the statement reads.