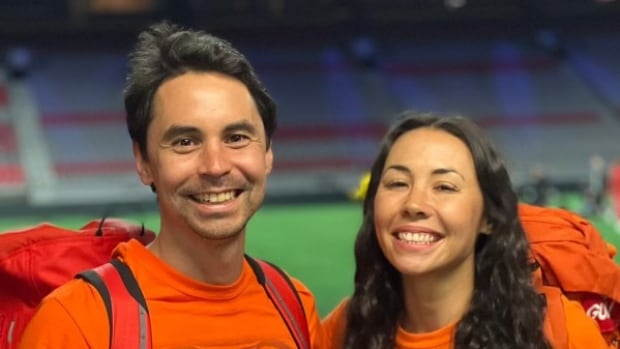 Two Inuvialuit siblings born in Yellowknife say making it all the way to the finale of Amazing Race Canada helped forge a stronger bond between them — and gave them a lifetime’s supply of inside jokes to laugh at.

Jesse and Marika Cockney flew, roller-skated and sang their way to a second-place finish in the reality show’s eighth season, the final episode of which aired Tuesday night.

“That’s really the thing with this race — there’s no way to prepare for it. You just have to have an open mind, be ready to take on the challenge, put yourself out there and try to get better every time,” said Jesse.

This season’s finale took them to Vancouver, where Jesse jumped out of a helicopter and the two of them did a roller-skating course.

The next task had the self-described non-musically-inclined duo perform opera in Italian, which they don’t speak.

“That was embarrassing,” Marika laughed.

“‘Sang’ is probably a loose

Jesse and Marika Cockney flew, roller-skated and sang their way to a second-place finish in the reality show’s eighth season, the final episode of which aired Tuesday night.

The Trailbreaker9:48Inuvialuit siblings Jesse and Marika Cockney made it all the way to the season finale of the amazing race Canada. They joined us this morning.

The Amazing Race Canada just wrapped up its eighth season. The reality show follows teams of two as they race around Canada, competing in all kinds adventures along the way. Two Inuvialuit siblings born in Yellowknife made it all the way to last night’s finale. Jesse and Marika Cockney both joined guest host Marc Winkler on the line this morning.

Though Marika credits her big brother for getting the team so far, Jesse said it was really a team effort.

“We started the Amazing Race on leg one, really discombobulated, back in Montreal. We just had to get better from that point,” Jesse said.

Marika said though the challenges themselves were difficult, so was the time off-camera.

“We weren’t able to connect the way that we normally do with the rest of the world,” she explained. “Jesse and I are brother and sister, so we had our challenges too but we got through it in a good way. And I think what we learned is we just really have to trust each other and learn along the way.

“We have so many inside jokes, now,” she added.

As for the most memorable part of this season?

“The bandanas had numbers on them, and we had to count up the numbers on the bandana and add them all together while there’s like 100 goats running around in this pen,” he recalled.

“It really felt like The Amazing Race Canada, doing that challenge.”