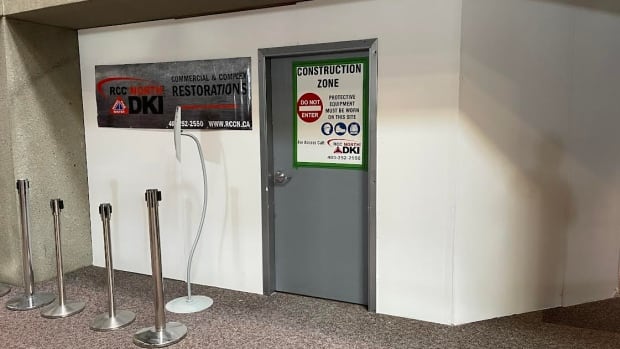 The fallout from a security incident at city hall in August will reverberate for months to come.

In early August, a man who was experiencing a mental health crisis broke into the building in the middle of the night. He set several fires before he was arrested and those fires activated the building’s sprinkler system. Water poured through parts of three floors of the building.

Some public services were temporarily displaced because of the damages, but only one, the planning and development service counter, has yet to return.

The manager of building infrastructure for the city’s facility management, Susan Specht, said that area will likely take the longest to repair.

“The limiting factor for us to get that service counter back up and operational is the availability of the finishes and the extent of damage to the millwork. The millwork is a custom item,” she said.

“We anticipate being able to return that service to its permanent location by the end of this year.”

She said damaged areas include carpets, furniture, ceiling tiles, walls and other materials.

Spread across three floors, the city estimates it will cost between $1.3 million and $2.2 million to complete the repairs.

“We’re working in that range while we continue to finalize some of the finishes that are required and working with our partners to understand how we can work within the supply chain challenges that are happening globally to try to expedite some of these repairs,” said Specht.

Most of the repair costs will be covered by the city’s insurance policies.

The intruder is not facing any charges because of his medical condition.

The city is taking measures to prevent another incident like this one from happening again — blocking off the third floor through the atrium of the building.

New gates are being installed in the atrium, which will add the Municipal Building to the city’s plus-15 network.

After the network closes at 9 p.m., the gates will remain closed until morning which would limit any after hours access solely to parts of the atrium unless an employee has key card access or checks in with security.

Work on the new gates will be completed in the next few weeks.