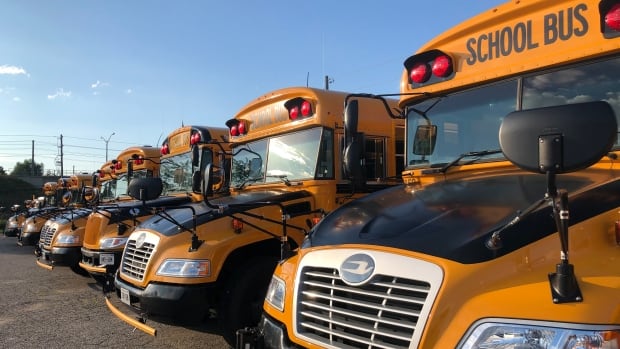 The Student Transportation Services of Waterloo Region (STSWR) is warning the ongoing driver shortage has forced it to change or even cancel numerous school bus routes across the region.

Last week, STSWR announced on its website that while more than 90 per cent of bus routes throughout the region were operating normally, some routes were experiencing “more frequent and prolonged delays” due to driver shortages.

That has resulted in the cancellations of at least eight school bus routes this week.

STSWR says this is something students and parents could encounter from now until December, although the same routes will not be cancelled for more than a week at a time and families will be notified at least a day in advance if their child’s route won’t run that week.

Cancellations will also be posted to the STSWR website.

The announcement goes on to say that STSWR understands “the significant impact this decision will have on our students and their families and caregivers. STSWR does this only as a last resort. We hope that this proactive message will allow families and caregivers to better prepare for and react to the cancellation of bus routes.”

They include learning remotely asynchronously through the class virtual learning environment or by accessing lessons on TVO.

The alternative suggestion is for families to find another way for their child or children to get to school.

A spokesperson for the transportation service said they were unavailable for an interview.

Meanwhile, during a committee of the whole meeting Monday night, Waterloo Region District School Board trustee Jayne Herring brought forward a notice of motion to ask staff to explore a partnership between  Waterloo region, the cities and townships to provide free bus passes for secondary students and free transportation for students from kindergarten to Grade 8.

If you have been affected by the recent school bus shortages, CBC K-W would love to hear from you: