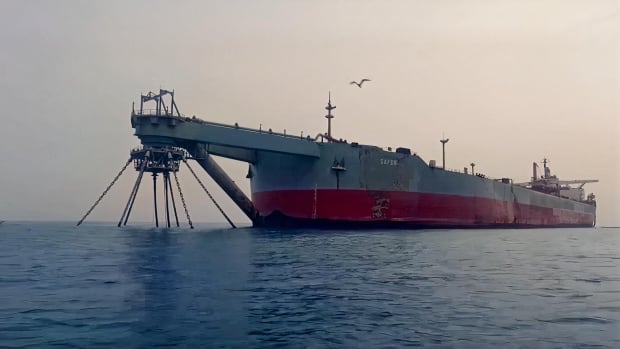 Months after several countries pledged millions of dollars to the UN to salvage a decaying oil tanker in the Red Sea, the international agency is still waiting for most of the money to arrive, as time runs out to avert an environmental and humanitarian catastrophe.

The United Nations in May launched an effort to raise $75 million US to pay for the removal of more than a million barrels of crude oil from the FSO Safer off Yemen’s western coast, warning the ship was at risk of disintegrating or exploding.

Such a disaster would have far-reaching effects for the countries and marine life along the Red Sea, and to global supply chains that rely on the ability to cross those waters, as well as the distribution of humanitarian aid to war-torn Yemen. The UN estimates a clean-up effort would cost at least $20 billion US.

On Wednesday, the UN said 17 countries, as well as companies and individuals, had pledged $78 million — more than enough to complete the first phase of the salvage plan. But most of the pledges had yet to be transferred to the UN, and the work could not begin until the money was received.

Canada committed $2.5 million earlier this month. Global Affairs Canada did not respond to a request Wednesday about whether the funds had been sent to the UN.

Speaking at the United Nations headquarters in New York, David Gressly, the UN’s humanitarian co-ordinator for Yemen, said he was confident countries would send the money by the end of September, in order for the delayed salvage operation to begin.

“While most of the money has not yet come in, most of the agreements [with donors] have now been signed, which are the prerequisite for the actual funds to be transferred,” he told reporters. “We have very hard commitments from those who’ve yet to sign contracts [that they will] do so.”

The UN did not name the countries that had yet to transfer funds or say how much money was outstanding, and ended its press conference after only a few questions from reporters.

The UN now has a very tight window to complete the four-month operation, which it had hoped to begin in the first half of 2022, warning in May that strong winds and currents in the Red Sea from September onward would increase the risk of the decrepit tanker disintegrating.

Gressly on Wednesday said he expected teams to be on the ground within a few weeks to begin preparations for the salvage work, which will take place amid a truce between warring parties in Yemen.

The salvage plan follows more than three years of urging from local environmentalists in Yemen, who warned of the risk of an ecological catastrophe from the rusting ship.

Since 1988, the vessel, owned by Yemen’s state oil company, has been used to store, transfer and export crude from the country’s oil fields.

But after war broke out in 2015 between Yemen’s internationally recognized government and Houthi rebels, the waters where the Safer is moored became contested, and the ship fell into disrepair. Greenpeace has described it as a “ticking time bomb.”

The first three months of the salvage mission would be spent preparing the ship for offloading the oil safely, including ensuring its oil tanks could be opened without risking an explosion, as its systems for pumping inert gases into the oil chambers no longer functioned.

Hydraulic pumps would be used to transfer the oil to a temporary vessel moored alongside the Safer. The empty tanks would then be cleaned to remove any remaining oil residue and debris before the Safer is towed away and sold for scrap.

David Gressly, the UN’s humanitarian co-ordinator for Yemen, explains details of the four-month mission to remove oil from a decaying tanker off Yemen’s coast before it causes an environmental disaster.

“We want to take a very careful approach to making sure that not only is oil not contaminating the bay during the transfer, but that the ship itself is fully clean before we consider it a successful operation,” Gressly said Wednesday.

He was confident the UN would be able to raise a further $38 million US it needed for a second phase of the operation, which involves finding a permanent storage solution for the oil.

It is unclear why Canada waited until September, days before the UN’s deadline to begin the operation, to announce that it would contribute to the mission.

In May, Global Affairs Canada told CBC News the government did not plan to give money. It did not respond to multiple requests for further information.

The UN launched a public crowd-funding campaign in June in an attempt to make up the shortfall from countries’ contributions.

After the Canadian government’s change of heart this month, Greenpeace Canada wrote to Minister of International Development Harjit Sajjan, urging him to ensure the money was transferred quickly.

“Failing to provide the funds, despite pledging to do so, puts at increased risk all the efforts by many parties to resolve the threat posed by the Safer,” the letter read.

The Dutch government on Tuesday announced an extra €7.5 million ($10 million Cdn) for the operation, taking its total contribution to €15 million. The United States pledged $10 million US in June, following pledges from Qatar and a number of European countries. Members of the public had contributed $200,000 US, the UN said in a statement Wednesday.

The operation was set to cost less than the UN originally expected. In May, it projected it would need to raise $144 million US, but on Wednesday, it said it had found a cheaper long-term storage option, and now expected the total cost to be $113 million US.