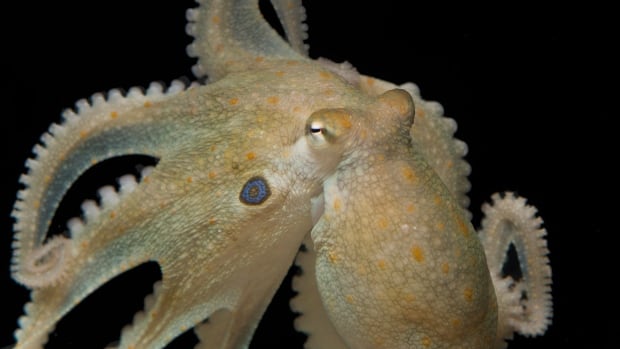 As It Happens6:32When an octopus kills, it is stealthy and calculating

When an octopus entangles its prey in its swirling mass of tentacles, it may look to the untrained eye like chaos. But, in fact, it’s a highly calculated hunt.

Researchers in Minnesota filmed octopuses killing prey in a tank, and found the creatures used specific, identifiable techniques to catch their dinner.

“For us, the main take-home was [that] it was really repeatable,” co-author Trevor Wardill, an animal behaviour professor at the University of Minnesota, told As It Happens host Nil Köksal.

“They would come out in a very specific way and we found quite different approaches — strategies, if you like — of how they captured shrimp versus crabs.”

The findings, published this week in the journal Current Biology, not only help us better understand the complex and mysterious sea creatures, but could also have implications for the future of robotics.

Watch how an octopus kills its prey

To observe how the cephalopods catch their dinner, the team put two-spot California octopuses in tanks with little dens for them to hide in.

When the creatures were happily ensconced in their dens, the scientists dropped live crabs and shrimps into the tank in front of the den’s opening, then filmed the creatures as they lunged for the prey and gobbled it up.

As they observed the footage in slow motion, a pattern emerged.

For example, they quickly learned that when it comes to killing, octopuses don’t use all eight legs equally. Instead, they favour what scientists call their “second” legs — the limbs on either side of the tentacle that emerges from the front and centre of their bodies.

Which of those two tentacles they use depends on which of their eyes spotted the prey.

“The surprising thing with octopuses that the sort of general public may not understand is they hunt with just one eye. So there’s one eye looking out into the world in one direction, and one eye looking in the other direction,” Wardill said.

Vecchione, the curator of cephalopods at the National Museum of Natural History in Washington, D.C., says the study is interesting because it looks at a different kind of octopus hunting than scientists usually focus on.

Octopuses, he says, do most of their hunting by swimming around and sticking their limbs into various nooks and crannies to see what they can find. When they do that, he says, the limbs act almost independently, as each one has its own large nerve ganglion, or “mini brain.”

“There’s been a lot of emphasis lately on the fact that each of these arms can be doing its own thing, and now, you know, the central brain of the animal is just doing high level co-ordination kind of things,” Vecchione said.

“This deals with the fact that they’re also often very visual, and how they act when something is in sight. And the answer is very different, actually.

“If they’re doing a visual attack, then they appear to have a preferred way of doing it, and they have learned to do it in different ways for different types of animals.”

When crabs were dropped into their tanks, the octopuses favoured a “parachuting” approach — attacking from above and enclosing the poor, unsuspecting crustaceans. For the shrimp, they tended to approach stealthily, and quickly ensnare them with a single limb.

One of their shrimp-hunting techniques took the researchers by surprise. The critters would snake one tentacle out in front of the prey and wave it around before closing in for the kill.

The scientists suspect it’s a way of distracting or confusing the shrimp, which, if it senses movement nearby, can very quickly dodge out of the hunter’s reach.

“And first, when you see that you think this is weird. Isn’t it going to scare away their prey? But they kind of wiggle it gently,” Wedell said.

“Meanwhile, they’re approaching quite slowly, their whole body, so that they get in reaching distance and then they’ll strike at the prey.”

Robots for surgery and exploration

Wedell says the findings could prove useful for the creation of highly dexterous, octopus-inspired robots.

“We now know [controlling] them is a little less erratic than what you would see if you just were a naive observer of an octopus,” he said.

“And so we’re hoping that that will inspire, you know, engineers to make fancier vehicles that maybe do underwater rescue or, you know, surgeons that could have a very highly co-ordinated arm system to do keyhole surgery or something like that.”

Vecchione, meanwhile, says anything that helps us better understand how cephalopods think and behave is welcome, because they are so different from any other species we consider intelligent.

Not only does an octopus have mini-brain in each tentacle, but its primary brain is ring-shaped, with its esophagus going right through the centre.

“If you think about intelligent animals, almost all of them that you might think of — you know, birds, parrots, dolphins or even fishes — they’re all vertebrates, and their brains are all built in the same basic model…. But this is something that’s developed in a completely different pathway,” he said.

“So how it does these sorts of things is important as far as understanding the more general questions about how things become intelligent and how behaviours develop.”